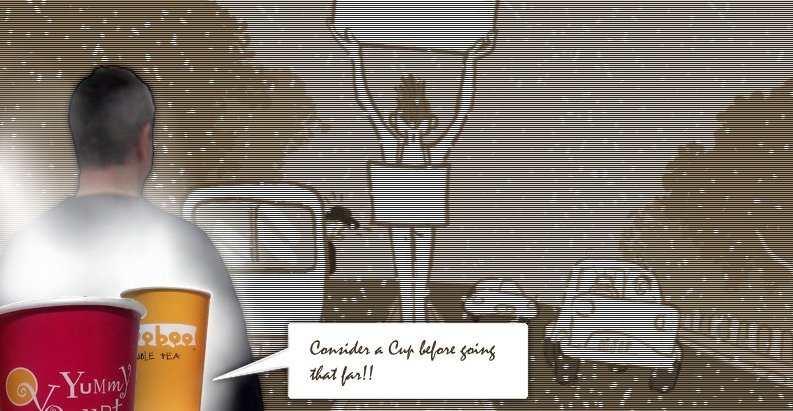 Brand recall has been a major source of concern to businesses for years. People have gone as far as trying to use subliminal messaging to embed a brand into a users perception by passing messages that by-pass the conscious mind. Although it is widely said that the famous Coca Cola subliminal messaging experiment in some movie theatres in New Jersey was actually a hoax, there is evidence that subliminal messaging has been used in advertising.

Trying to associate the human sub-conscious with your brand's image, for a certain action or perception, for example, the Coca Cola ad flashed for milliseconds between movie frames, whether it actually happened or not, is a way of passing subliminal messages.

But let's not try such odd experiments! Or not resort to drastic methods like displayed above. There are better ways as in continuously exposing your brand to the public by printing them on objects like cups, objects that are likely to be used repeatedly ( not the same cup but cups with the same imprint ).

Once you have been able to penetrate the target population with your printed paper cups, what about engaging them? engaging them enough to make them take actions that otherwise would be very difficult to achieve? for example, your customer could directly order your ice cream for home delivery simply by taking a photo of your pot, or be able to enquire about your product ( which could be anything, a car, a software, a book you have written, an event you have organized, a rock fest or an indie movie for example ), book a show, visit your website or send SMS enquiry directly from your cup.

Not Impossible with a QR Code

Sounds impossible, since so much information on a cup, that too in text that the user would need to key-in into his phone or any other suitable device, and then fill in required detail and send it to you, normally an average person would abort the process in the middle, if at all one user has enough initiative to go so far as thinking of even keying in a website link or message.

But, if there is something simpler? a simple little square printed on your cups, that the user only takes a photo of on his smartphone and there he is, the job is done.

This is where a QR Code comes to use, users are aware of QR Codes

3.3 Million UK consumers scanned a QR code in the 2nd Quarter of 2012, and this is what you need to make the user engage, interact and convert into a customer much more easily.

We do it for you

We print a QR Code instead of text pitches urging users to call, email, SMS or visit website, and there is several times more chance that a user would scan it and let the QR Code Scanner App of his smartphone do the needful.

As per Wikipedia, QR code (abbreviated from Quick Response Code) is the trademark for a type of matrix barcode (or two-dimensional barcode) first designed for the automotive industry in Japan. A barcode is an optically machine-readable label that is attached to an item and that records information related to that item. The information encoded by a QR code may be made up of four standardized types ("modes") of data (numeric, alphanumeric, byte / binary, kanji) or, through supported extensions, virtually any type of data.