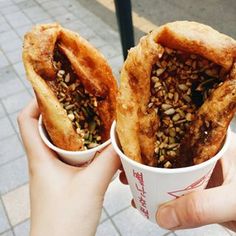 In the busy world we live in, eating and drinking on the go is pretty common. However, when you picture delicious food and drink, you don't usually picture it being served in a paper cup. If you feel this way, you're sadly mistaken because some of the best cuisine and beverages will be sold to you in the 'takeaway' form of a paper cup. Sweet food sold by vendors to passers by like you and me is one of the BEST ways to enjoy food and drink. Let's take a look at what some of the best dishes served from paper cups are.

This is a pretty obvious one and who doesn't love coffee? Whatever place you are buying coffee from, if you get it to 'go', it will be served to you in a cup. Coffee has been sold this way since the early 20th century (before that, this energy boosting drink was sold in plastic cups.) When it was discovered toxins can get into the liquid due to an unfriendly reaction with the plastic, this was upgraded to paper cups. Paper cups are natural, free from toxins and don't interfere with the taste of the coffee - which is always a bonus! 7-Eleven was actually the first establishment to serve coffee in paper cups and soon enough, pretty much every coffee outlet/cafe in the world soon followed by example.

These delicious sweet treats are popular all over the world and they come in a variety of shapes, sizes and flavors. Although no one place in particular serves cupcakes in paper cups, it is done. This is because they fit perfectly in paper cups and can even be stacked up together for your convenience. If you are buying several cupcakes from an establishment, being served them in a plastic cup is likely.

If you've never heard of tortoni, where have you been? It's a delicious dessert that originated in Italy more than two centuries ago! The dish is named after a man called Giuseppe Tortoni who ran a quaint cafe in Paris in the nineteenth century. The dessert is basically made up of heavy cream, vanilla, egg whites and sugar. It's whisked together and then frozen to make a sweet but light mousse that is sure to leave you feeling satisfied. We haven't even got to the best part of this dish yet, the base of the dessert is made up of crushed macaroons. Macaroon crumbs, cherries and almond pieces are then sprinkled over this dessert to finish it off and really make it something special. Liqueur is also sometimes used in the creation of tortoni to give it an extra kick!

Huckabuck, otherwise known as hucklebuck, is another dessert dish that is poured into a paper cup, frozen and served. It's usually Kool-aid or another soft drink that is used to create this tasty, icy treat and with some vendors, you can even request what beverage is used. Corn syrup and sugar cane is also used in this dessert sometimes and it's particularly popular in Georgia and Louisiana. When the beverage has been frozen for a couple of hours and is ready to enjoy, it's flipped over so that the sugary part is consumed first. Kids in general love huckabuck and like to enjoy it with a spoon on their way home from school. It's also served at festivals and tastes amazing especially during the hot weather.

Another fine creation from the Italians and spaghetti in a cup has become popular in many states over America. 'The Spaghetti Incident', which is a restaurant in Manhattan, first served street style spaghetti in a paper cone. It's actually really clever if you think about it, spaghetti can be such a messy food to eat so why not take it a step further by enjoying it as you walk along the street? Serving such dishes in paper cones/cups first became popular when street vendors would do exactly that in post-war Italy at festivals and other gatherings to help bring people together.

You might not picture a sophisticated wedding cake being served in a paper cup but 'Puccinos Coffee' in the UK has an innovative idea that will leave your mouth watering. It's a drink that is made up of espresso, sugar free white chocolate and almond syrup. Steamed milk is then added to the drink along with whipped cream and sliced almonds. This coffee with a twist is super popular and tastes just like wedding cake.

In many countries all around the world, you can buy fries from vendors on the street that are served to you in a paper cone/cup. For some reason, they taste even better than regular fries this way - there is an extra taste that is difficult to describe. In addition to that, if you are in a rush and need something to eat on the go, fries from a paper cup is perfect.

This is a type of corn dish that is sold in paper cups in Mexico. Esquites is commonly sold by street vendors, it's quite a simple food but tastes amazing. It's basically corn kernels that have been barbequed for extra flavor, they are sold with a variety of toppings of your choice. A large cob of corn is cooked on charcoal until slightly charred, the kernels are then removed, placed into a paper cup and served. Not forgetting the toppings of course - you will have a choice of cheese, chilli, lime and more. It's served hot and tastes best eaten quickly with a spoon.

While it might have a complicated sounding name, hetteok is basically pancakes and I'm sure you've heard of those. They are sweet and have a whole range of flavors that you've likely never experienced with real pancakes. They are made by a large piece of dough being stuffed with ingredients such as cinnamon, seeds, nuts and sugar. This jam packed dessert is then fried on a large stove until sweet and just the right amount of crispiness. The dish is served boiling hot in a paper cup for your enjoyment. This can be quite a messy one to eat but it's definitely worth it.