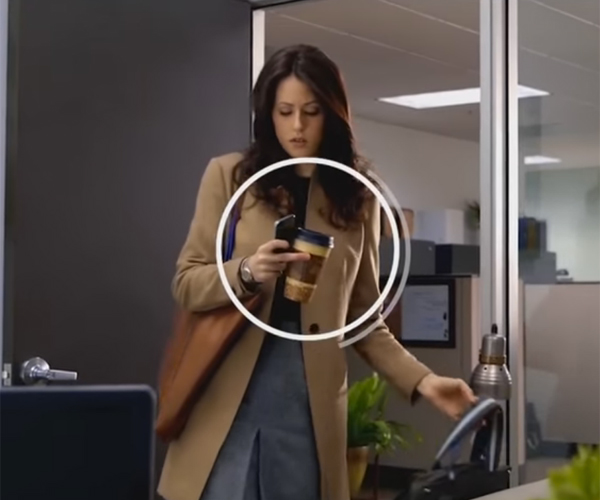 It's the sheer pervasiveness of paper coffee cups, isn't it?

From personal experience, that's the first aspect of the reverse cultural shock experienced upon reentering the so-called 'developed world' that I can actually put my finger on.

The truth of the matter is that these days the franchise coffee bar with its disposable paper cups is both American as apple pie and as European as Champion's League. In fact, it's hardly a new phenomenon, as this has been the case for decades now. It's hardly surprising then that paper cups, styrofoam cups and other variations of the to-go coffee cup are staples in Hollywood movies and popular TV series either then. After, all art imitates life (or is it the other the other way around?)

Think about it: the hardboiled detective who plays by his own rules, the millennial hipster who's juggling the stresses of young love with getting her 'look book' ready for her year end project at the fashion design institute, or anyone of a number of other archetypical onscreen characters in popular culture, they all seem to start their hectic day with a hot cup of joe in a disposable cup.

All you have to do is channel surf for a few minutes to see that this is definitely the case. The characters in Gilmore Girls always popping into Luke's diner for a coffee to go. Although it's been many years the last original episode, "Friends" is a classic TV series that was practically based around the coffee shop 'Central Perk'. A more current show where the main character is constantly sipping from a cup would be 'Scandal'; the show is based around the exploits of Olivia Pope (played by Kerry Washington and based on the real-life crisis manager Judith), a high-strung and determined Washington D.C insider and fixer who's fueled by caffeine.

Comics, Novels, film, or television, whatever the medium, writers want their audience to be able to identify with their protagonists. "He drinks coffee... and SO DO I!"...or something like that, is what the writer hopes you'll take away from watching a fictional hero or heroine partake in the very same rituals and daily routines that you do.

For that reason, prop masters on movie and TV sets need to have coffee cups at the ready. However, if you look closely you'll notice that the coffee cup the character's holding is probably empty.

That's exactly the observation that media professor and Slate columnist Myles McNutt made, and in March of 2016 he put out a <a href="https://www.youtube.com/watch?v=IpEUNn5a0rE">video essay</a> on YouTube to point out the deceitful dramatic drinking that dominates the small screen and the silver screen alike. The video went viral, eventually amassing more than 140,000 views (and counting).

If you read through the comments for McNutt's popular YouTube video you'll find that a reoccurring theme is that a lot of people have not only noticed the empty coffee cup props in movies and TV shows, but it annoys them as much as it does McNutt. In the video's narration, McNutt boldly asserts that television has a hard time pretending that their coffee cups aren't empty, that television actors are generally very bad at pretending that prop cups they're carrying contain liquid of any amount and that this drives him crazy.

What's more, McNutt goes on to explain that two years earlier in 2014 he had started the social media hashtag #EmptyCupAwards by which people can share their movie and television clips where the actor is clearly sipping hot air from an empty cup.

Granted, McNutt also notes in the video that most people don't notice the ever-present empty cups in films and TV. I would have to put myself in that category, to be honest. I'd never given the onscreen coffee cups any thought at all. Nonetheless, after watching his video I'm now hyper aware whenever I'm watching a movie or TV show and a character shows up holding a coffee cup I find myself paying close attention. I have to give McNutt credit: it seems to me that the cup is empty pretty much every single time. In fact, unless there's steam rising out of the cup, I'm now inclined to automatically assume that there is nothing in the cup.

To play devil's advocate, there are some practical reasons to use empty cups. For starters, spilled liquid could cause wardrobe and equipment malfunctions. Seeing as how running a film set can cost hundreds of dollars a minute, anything that slows down a production ought to be avoided. It could be argued that having the actors sipping coffee take after take after numerous take could result in a serious case of gut rot by the end of the shooting day. (Still, they could use water).

And then there's the fact that it is fiction after all, and the viewer needs to suspend belief to a certain extent. Nobody seems to get bent out of shape that everyone in movieland seems to have a phone number that starts with the prefix 555, so what does it matter that an actor apparently doesn't feel the need as an artist to handle his or her venti mocha convincingly?

For my part, I've come to a conclusion that's more or less the same as the one McNutt reaches at the end of his video essay: yes, the low cost and fast paced environment of film and television production can't afford any complications wrought by spilled liquid. Nonetheless, a professional actor's job is to create an alternate reality that a viewer can immerse can get lost in for an hour or two. When the actor is holding their coffee cup at an angle that clearly indicates that there's nothing in it, this constant break with reality ruins the immersive experience.

Anyway, maybe that's taking things a little too seriously. At any rate, take the time to read through #EmptyCupAwards. The lack of effort is laughable, to say the least.